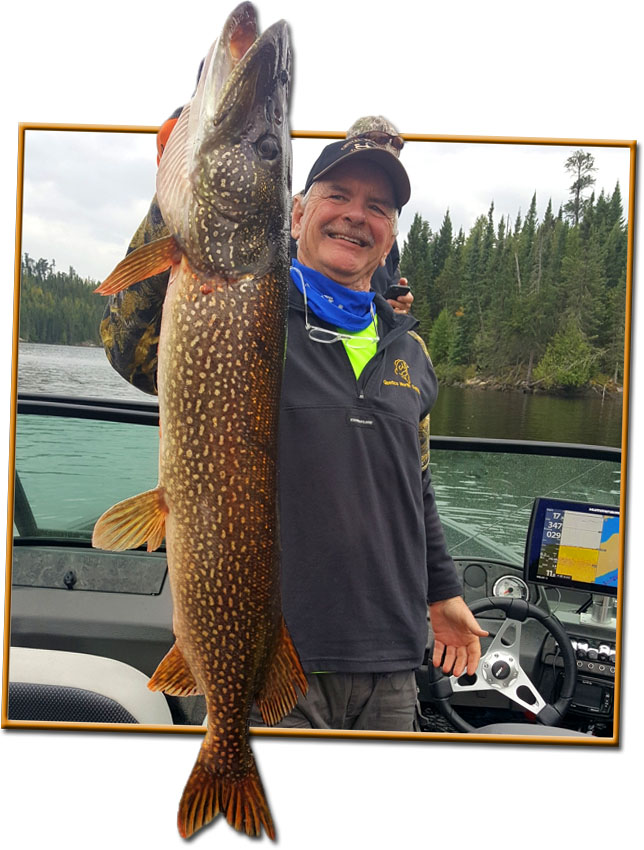 The northern pike is the most aggressive and most easily caught species in our area lakes, as it feeds on almost anything at any time. Many anglers will target another species in the morning hours, and as action slows for fish such as the walleye or trout, they will go after northern pike during the midday hours.

Spring pike fishing is some of the most exciting, as the northern have completed spawning and are feeding up after their vigorous spring ritual. The large female pike can be spotted cruising the shallows looking for an easy meal. Usually, smaller, male small mouth bass that are defending their beds are an easy, full-course meal for an average size northern pike. The larger pike will even attack and eat smaller pike up to half the length of themselves. Talk about ferocious!! Some key locater lures for spring pike are large Daredevils, Doctor spoons, and Williams Warblers. These lures can be worked fast in shallow and deeper water to cover a lot of area in a short time. Spinner baits and large Mepps spinners are also good choices for spring pike. If these lures are not triggering a lot of action, try switching to large Rapala floating minnow baits size 13-18, or something similar. The irregular twitch motion of these baits can be critical for triggering strikes if the fish are being a little sluggish. Another favorite pike lure, throughout the season, is a larger plastic, un-weighted minnow or fluke with a 1/0 to 3/0 hook threaded through the head of the plastic bait. Perhaps the deadliest tactic for BIG spring pike is bobber fishing a frozen ciscoe. Very rarely will a large pike turn down the easy opportunity to feed on an oily ciscoes dangling in her area. This tactic will produce many large fish, especially on a pike that follows in another artificial lure, but does not take it. Definitely use a leader with most of these lures, as the sharp teeth of a northern pike can easily cut through monofilament lines up to 30lb!! Work these lures in the shallower, large spawning bays with black muck bottoms. These bays warm up fast and draw in baitfish and spawning small mouth. If the pike are not up in the shallows, try casting the edges/drop-off areas at the mouths of these bays. Also, current areas can hold nice pike early in the year, as they will spawn in creeks and small rivers.

As the weed lines begin to establish themselves, and baitfish and other smaller species of game fish move near the weeds, the pike will follow. The same lures used for the spring pike are very effective for the summer too. For the most part, fish the same techniques as for early season pike, except you may have to try a little deeper water, especially along weed edges and rock shelves. In addition, some large pike can be caught near schools of walleyes as a small walleye is very good forage for big pike. Many walleye anglers report of big pike coming boat-side and latching onto their supper as they are bringing it into the boat!!! So always beware, as you can never really predict at what point will a big ol' pike decide to chomp down on your lure!!

Once fall sets in, the northern pike will move out to deeper water as the weeds die off. This is very similar to the patterns of the small mouth bass. The pike will feed on deep water baitfish schooled up and can be a little trickier to pinpoint in this deep water. Slow-trolled heavy spoons out deep can produce good action, as well as large deep-lipped deep diving crank baits. Vertical jigging with large plastic shads and twister tails can be good as long as it is not too windy out where the baitfish are. Also, don't forget that wherever you find walleyes, there will always be some large northern hanging around them looking for a tasty morsel. Slip bobber fishing large minnows or frozen ciscoes can be an easy way to catch these deep-water lurkers also. Just make sure you have your bait down near the baitfish.